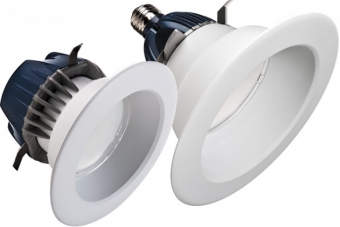 The U.S Department of Energy Gateway demonstrations allow for detailed LED evaluation that just can’t be repeated in a laboratory. When high-performance LED products have been installed in various real-world situations, the DOE has been able to collect data on both product performance and cost. Here we look at some results that show LED retrofits do make economic and environmental sense.

The University of Maryland’s Clarice Smith Performing Arts Center (CSPAC) is located in College Park, MD. According to the DOE gateway report, a long-term study of the Center’s LED retrofit not only uncovered significant energy savings, but the project demonstrated maintenance savings and improved light quality to further justify the switch to LED.

Prior to the retrofit, the arts center staff complained about constant maintenance on the old halogen lighting operated 7300 hours per year. Since the LED installation a couple years ago, there has been a huge reduction in maintenance. CSPAC retrofitted a total of 87 luminaires. After 17,000 hours of operating, there was still no maintenance required. The DOE did note a slight shift in LED color at 12,000 hours, but most have performed above normal range. The Center has reported that the installation has delivered an 80 percent energy savings.

Princeton University’s main campus sits on a 380-acre parcel of land, consists of over 160 buildings, about 7,000 students, and 5,400 employees. Everyone at Princeton knows the University has a big environmental imprint, which is why they have put a sustainability plan in place and are committed to decreasing carbon dioxide levels to 1990 levels by 2020.

The Department of Energy Gateway report examined a retrofit at the Carl Icahn Laboratory at Princeton University in Princeton, NJ. The DOE looked at the lab as part of a larger Princeton campaign to install no less than 100,000 LED fixtures throughout the large campus. There were about 245 lights retrofitted in corridors, lobbies, as well as conference rooms. The DOE has reported those changes are delivering a 60 percent savings. Stable color performance has been reported, and little maintenance was required after 7400 hours of usage.

These are just a couple examples from the DOE gateway report. The government agency will continue to monitor CSPAC and Princeton, as well as other real-world LED installations to maintain a record of what is and isn’t working. In recent months, the DOE has been doing research on, and promoting connected lighting systems. We hope to bring you more on that in future blogs.