Taking Glow-In-The-Dark Into the Future 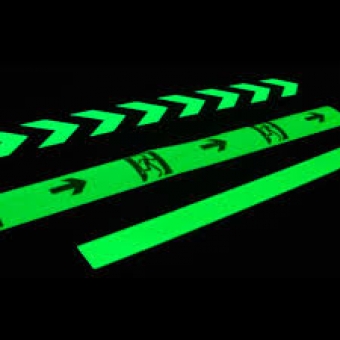 Glow-in-the-dark is certainly not anything new, but it is improved and it is diversifying in terms of application. While Illumineris Inc. distributes photoluminescent safety products, such as exit signs and egress pathway markings, this is just the beginning for what is expected to be a growing trend in energy conservation.

Did you know that over the last couple of years, engineers in the Netherlands have been testing photoluminescent material on roads? Yes, the country has glow-in-the dark road lines on at least one stretch of highway. While we are accustomed to painted road lines, the engineers in the Netherlands started experimenting in 2014 with adding photo-luminising powder to paint so that it charges up in the daytime and slowly releases a green glow at night, thus eliminating the need for streetlights.

The glow-in-the-dark roads aren’t the only creative application for photoluminescent material. A company in England has been working on lighting up ecological paths using a photoluminescent spray. There is also a business in the UK that produces photoluminescent pebbles that you can add to gardens or pathways to eliminate the need for front or backyard lights.

Some people suggest that there are untapped opportunities to save money on energy costs by using glow-in-the-dark products. For instance, the manager of the popular online DIY (Do It Yourself) site instructables.com was looking for a way to fill in ugly blemishes in a wood table and came up with the idea of using photoluminescent resin. He ended up with a creative looking table with a second purpose – it charges up in sunlight and emits a cool blue glow when it is in darkness. Now imagine park benches or picnic tables with this resin. Could it eliminate the need for expensive pole lighting in your neighbourhood park?

Those who work with photoluminescent material call this “exciting times”. What was once a material used in children’s toys, simply to add some fun, is now being considered an important part of our efforts to save energy.