Renewable Energy Comes to the Farm 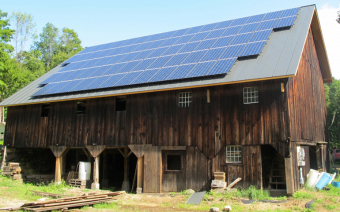 Many farmers have been producing renewable energy for decades. They’ve been growing corn to make ethanol, but only in recent years have weather phenomena and high-energy prices convinced them to look elsewhere for power.

Here’s the story of one California rancher who has been harnessing the power of renewables.

Red Rock Ranch has been using green waste and other locally sourced means of renewable energy to power their farm. In partnership with Biodico, they produce their own biodiesel, which they use to power tractors. The energy savings doesn’t stop there as they have installed LED lighting, solar panels, and thermal energy technology. Fresno area news outlets report that with all these tools at their disposal, the Ranch has earned the title of the world’s first and only zero net energy farm.

What pushed Red Rock Ranch towards these renewable efforts was the chance to save a lot of money. By using renewables, it stops them from having to purchase expensive, imported fuel and energy. By creating their own biodiesel, they are also creating more jobs. This is allowing the ranch to hire more people to produce their biodiesel, providing their workers with overall higher average wages and benefits.

Red Rock Ranch isn’t the only farm in North America that is positioned to reap the benefits of renewable energy. Slowly but surely, more farmers are seeing that renewables not only save them money; they can also be a revenue generator. For instance, when it comes to wind power farmers can use the power to pump water and/or generate electricity; however, that’s not all. Developers will pay as much as $5000 for farmers to allow them to install wind turbines on their land to help provide power to electric companies, as well as consumers. Additionally, plants and organic waste generated on farms can be turned into energy and sold to energy companies. Yes, corn was the first energy crop, but now prairie grasses and fast-growing trees can provide biomass waste for energy conversion. This is the kind of energy that can power tractors and heat homes. Lastly, solar energy can be used on the farm to save money and reduce pollution. Solar heat collectors are often used to dry crops and warm greenhouses.

So, as we go through the next decade, the family farm may look the same, but how it operates is bound to be drastically different.